John Doyle, Konrad Finckenstein, And The One Armed Man...

Remember The Fugitive movie? Course you do.

Harrison Ford plays Dr. Richard Kimble who, after being falsely accused of murder, goes on the run from Federal Marshall Sam Gerard (Tommy Lee Jones) to try to clear his name and bring the true culprits (the One Armed Man, who in turn had been hired by one of Ford's colleagues) to justice. 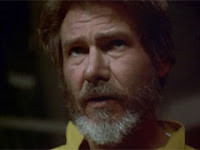 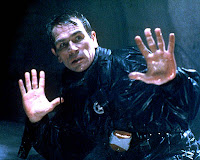 At one point, Gerard has Kimble trapped in an aqueduct...

Keeping that in mind, let's jump ahead to the CRTC meetings and announcements of the past several weeks.

Sidebar: I know I appear late to this party, as Jim, Carolyn, and Denis have all already spoken well and loud on this subject, but I started this post on Friday...honestly...it's just that life intervened.

Dead Things has already been highlighting a lot of John Doyle's column's from the Globe & Mail recently, HERE and THEN HERE, both intent on sending a message to the CRTC bosses attending hearings in Gatineau.

This is a miserable time in the Canadian TV racket. Beleaguered by cuts in content regulations and belittled by many, the industry is in dire need of a boost. A few things need to happen to make it more robust and in good fettle for the telling of compelling, entertaining Canadian stories to Canadians.

One thing that needs to happen is this - the creation of a hit one-hour drama on CBC, CTV or Global that pulls in close to a million viewers a week. We need another 'Due South' or 'Street Legal', a show that has a mass appeal and a million viewers. Without that, Canadian-made TV will always be perceived as in the weaker position, looking inept.

Doyle expands on his point in his second column:

As the TV racket here is distracted by corporate machinations, takeovers and CRTC hearings about these matters, the lack of hit dramas is still the gnawing loss.

When most Canadians watch TV, drama is what they want to watch, and the majority of the most-watched programs in Canada each week are dramas. But we're not making any.

Perhaps, as the CRTC attempts to regulate all the takeovers and manoeuvres, it could take a look at its own record and do something positive for the makers of Canadian TV, not just the executives. It could demand more drama be made. Its own figures, and the situation in the U.S. market, make it an obligation.

A tip of the hat to Doyle for telling it like it is...but what is he asking for exactly?

Denis seems to think Doyle's calling for the CRTC to extract from CTV the first plank in a new drama commitment...a first step in reversing the 1999 decision that changed the definition of "priority programming" to that "priority" now included entertainment and reality shows, and that let broadcasters off the hook for making and airing one-hour Canadian dramas.

Fair enough, but is reversing that change even on the table? Is more dramatic programming plans and funding even on anyone's radar besides those of us who want to see it and produce it?

Some commenter at Dead Things stated: The CRTC never flexes its muscle; it's theatre, not regulation. And making a stand for funding more Canadian drama with the goal of some 'hits' involves accountability...and nobody at the networks in this country seems to want to go on record fighting for something that 'if it doesn't hit' means they could be called on it...and possibly (gasp) lose their job.

I'm already getting bored writing this - the broken record quality of it all - so you must really be getting bored reading it...time to wrap up.

Look at it this way...there's this really passionate journalist in Doyle making a compelling case for increasing funding to try to make some hit TV shows in this country. And there's some really passionate creatives/blogger-types making solid rationale arguments for if not more funding, at least eliminating simulcasting. But that bunch of us are also feeling kinda like Richard Kimble...accused of an inability to create and sustain a hit indigenous show (without adequate budgets, resources, opportunities...yes, opportunites is the key).

We need someone in our court...like the CRTC. Like Konrad Finckenstein.

So cut to the end of last week, and what did we hear...the CRTC didn't announce any additional funding and/or support for indigenous dramatic programming, even as payback for allowing all the big corporate/network takeovers and mergers that are going on.

Instead, with the dispassion of a Federal Marshall/bureaucrat just 'doing his job', all we really heard from Finckenstein is that they would be relaxing regulation rules for the Canuck airwaves, like letting the broadcasters decide how much advertising they want to sell.

From the Globe & Mail:

Canada's broadcast regulator announced Thursday that it is getting out of the business of regulating how many ad minutes broadcasters can air each hour. “You don't regulate what you don't have to,” Konrad von Finckenstein, chairman of the Canadian Radio-television and Telecommunications Commission, said Thursday.

“It's not going to make any difference at all to viewers,” said Jeff Wills who buys advertising on behalf of marketers at Wills & Co. Media Strategies. “If these shows are simulcast at prime time – the big shows that people actually care about – they are going to be restricted by how many commercials they can run based on how long the show is from the U.S.”


In the aqueduct, Kimble faces off with Gerard.


But wait, perhaps there's hope. You see, by the end of The Fugitive, Gerard has been convinced that Kimble is innocent and worth helping, and he does so. Maybe Finckenstein will do the same.

But this ain't Hollywood, this is Canadian TV....so I highly doubt it. 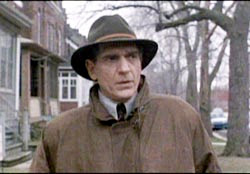 And who's the One Armed Man in this little scenario? I don't know exactly, but I betcha a pair of leather gloves he's working for the broadcasters.
Posted by wcdixon at 8:33 p.m.
Labels: Canadian television, Cancon, technorati

Fair enough, but is reversing that change even on the table? Is more dramatic programming plans and funding even on anyone's radar besides those of us who want to see it and produce it?

This probably won't comfort you much, but this is from Variety: "The CRTC also noted that the proportion of revenues spent by the English-Canadian networks on local programming continues to decrease and the regulator said it will be bringing this issue up with the individual networks at their next license-renewal hearings. But it didn’t propose any immediate changes to the rules governing how much the networks have to spend on local shows."

Bloggers been wonky lately...certain posts having no comments function or 'links to', or pics appearing and then disappearing...

Coincidence? I think not...

wcdixon
Will Dixon has been a tv industry hyphenate for twenty years - directing, writing, and producing a little bit of everything everywhere from Toronto to Los Angeles. Selected credits include 'Are You Afraid of the Dark?', 'Psi Factor: Chronicles of the Paranormal', 'The Outer Limits', 'Earth Final Conflict', 'Renegadepress.com', and 'Guitarman - the movie'. More recently Will has crossed over to the other side and is firmly ensconced as a Canadian television network executive. Please don't hold that against him.